Is Andrew the real reason Harry & Meghan were uninvited to the Queen’s wake? 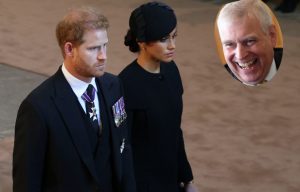 Charles III is already such a coward. So his son & daughter-in-law, Harry & Meghan, had to learn through the press that they’re “uninvited” to the Queen’s wake, the pre-funeral reception. No names were used in the un-invitation, of course.  It was just that “non-working-royals” were suddenly excluded at the last minute, so there could be no argument.  But Charles couldn’t even face his own son to tell him this?  After Harry had been included in that much photographed several mile march behind his grandmother’s coffin, and Meghan had been included with the women-folk riding in their stilettos in the limousines? Surely the exclusion from the wake wasn’t some official royal “snub” of Harry & Meghan.  It just beggars belief.

Nooooo.  It can’t be about Harry & Meghan.  It appears they’re only being used as the distraction pigeons to cover for keeping the other “non-working royal”, weirdo predator Uncle Andrew, away from a setting where he might pop off his fool mouth and say any wild thing in front of all the dignitaries of the world.  Silence for Andrew must be kept.  For Charles sake.  (Perhaps it wasn’t even the American clandestine services who took Epstein out.  Perhaps it was the Queen’s, and Charles knows it.)  Sorry Harry.  It appears your father the King has to use his own son, and use the world’s press-encouraged Meghan Derangement Syndrome, to cover for his brother.   Pretty sick.

So why weren’t Andrew and Harry informed sooner?  Perhaps the King waited to see if the American Resident Joe Biden was actually going to be well enough to show up, himself.   Only after the press announced that Biden and Dr. Jill were en route to London did we get the word that the “non-working royals” were to be excluded.  Of course.  Timing is everything.   Really, Charles wanted Harry there, but regrettably, cannot have two creepy predator weirdos, Andrew and Joe, working the floor at the same event, the Queen’s pre-funeral reception, no less.

Can you just imagine Andrew and Joe together at this shindig, swapping stories and drawing a crowd, topping each other with dirty ol’ geezer jokes?  That’s all anyone would remember!  Neither of them has the sense to not do that.  Charles can’t uninvite Biden, but he sure as heck can uninvite Andrew, using the non-specific “working royals only” excuse.

Sorry Harry.  It looks like you got caught in the crossfire.