Well, they are certainly pushing Chris Christi very hard right now, because Perry really blew it in last night’s debate, ripping his shirt off and exposing his bleeding leftist (and mean spirited) RINO heart.  People are choking on Romney’s history with Romneycare, which Obamacare was modeled on.   Chris Christi is the tough talking conservative governor of New Jersey, and he’s been saying for a year now that he refuses to run, but now he says he’ll get back to us within 2 weeks????    This article is very interesting reading, that’s for sure, about the big money holding back on Perry and Romney, looking for…. someone better…. 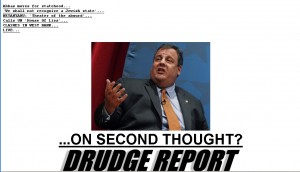 Christi’s announcement may be what Palin has been waiting on — if he didn’t announce, she would, kind of thing.  Remember, her life is still very full, with raising her children, particularly her sweet little Downs boy.

Rick Santorum is right on on every issue, but he might be just too nice a guy.  There are tough decisions to be made, such as sending Obama to Gitmo.  I still love Herman Cain, though.  He is soooo down to earth, and tough talking, without being bombastic like Christi.  I mean, Rush Limbaugh is more nuanced than Christi is.  Maybe the subliminal resemblance to Limbaugh is what has these people pumped up for him.  With his imposing physique and personality, though, maybe that’s why the big money-guns are looking to him.  He’s not a perfect-hair Ken doll, like Romney, Perry, or Santorum.  Cain, alas, being a tough businessman, might be just too much of an unknown quantity for them to back, when it comes to how he would stand up to such a tough office. Governors and former governors, like Christi and Palin, (and Romney and Perry), are a much easier read.

So hey,  I joined HonkiesForHerman.us, today.

Ya know, the thought just crossed my mind that it might just take a double Christ to get that Communist Muslim (from his own mouth) Anti-Christ out of there.  Because, I’m tellin’ ya, he has no intention of leaving, whether he runs or not. The DNC is trying to figure out how to dump this loser, so they can run Hilary instead of himself, pockets of sheriffs around the country are set to take action if he tries to commit voter fraud again and possibly arrest him for identity theft if he enters their states on some misguided campaign trail, to say nothing of GateRapeGate (which was revenge for the 2010 shellacking – announced as it was within 3 days of that shellacking), the Solyndra scam, and Operation Fast and Furious.  This guy has no regard for the law, much less the Constitution, so even if the DNC won’t run him, he has no intention of leaving office.  After the election, he intends to embark on another lame duck session of scorched earth policies and executive orders, culminating in some manufactured crisis “too good to waste” so he can declare martial law on or before January 19th, 2013.  And he so arrogantly assumes we’ll all just lay over and eat it!   Well, we’ll just have to hold the inauguration anyway, on January 20th, and drag him out of there in a straight jacket.  The guy’s got to go.  He’s got to go to Gitmo.  Heh heh heh.