Cowardly Anti-Trump Protesters Hiding Behind their Own Children

You’ve seen the protesters in Phoenix-Fountain Hills stopping all traffic for miles with just three cars parked across the road, blocking all ambulances and first responders too, making it a terrorist act.

You’ve seen the footage of the people screaming their hysterical hatred outside the Tucson Convention Center while we inside were listening to Mr. Trump talk about improving the economy, healthcare, taxes, and education.

You might even have heard Tucson footage of Trump calling the person in the KKK hood a “disgusting guy”.

But what you are not hearing (yet) from the media is that the protesters are using children.

I was seated behind the stage, and even before the rally had started, a disturbance came from the front row directly in front of the stage, as the police sought to eject someone gripping the barricade railing with all her might. “Oh my God!” I said to the friend I’d come with. “That’s a little girl!” As I watched, I’d realized that although she was fairly buxom, as young Hispanic girls often are (which I knew from my daughter’s classmates growing up in Tucson), this girl’s baby face was obvious. If she was more than 14 I’d be surprised.

That “KKK guy” turned out to be a barely pubescent little girl. I witnessed it myself from my vantage point at the rally, but was unable to capture it on camera. I’m hoping anyone who was able to capture it can send me pictures and/or deliver them directly to the media.

(Editor’s note: I have since collected these online.) 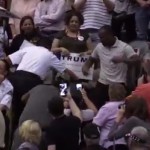 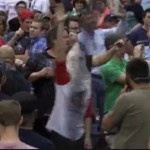 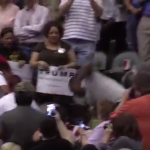 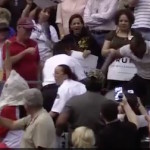 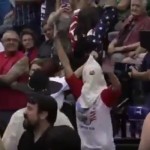 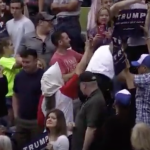 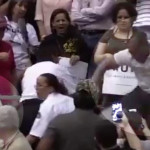 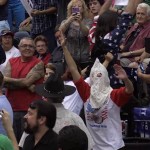 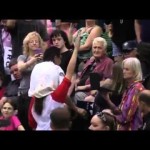 Obviously whoever sent that little girl in had no regard for her health, well being, or even her mental state, as they set her up to be dragged out by police, terrified little fists swinging, up the steep stairs of the arena past thousands and thousands of horrified people.

Can you say scarred for life?

Far too young to even drive, she could not have just shown up without adult “help”. Whoever set her up and sent her in had to have sold it to her as some kind of childhood costume joke. Kids don’t know that there are two hooded costumes so horrible, evil, and terrifying, that nobody even wears them for Halloween, much less sells them in costume shops — KKK outfits and burqas.

The odds are extremely good that that little girl had spent the first half of her day at the anime cosplay costume convention going on simultaneously with the Trump rally in other halls of the Tucson Convention Center. She likely spent the morning dressed as a cute-as-a-button Japanese cartoon character. Costumes are so much fun to kids.

And her day ended by being dragged out up miles of stairs past thousands of people while being denounced by a booming speaker from the stage, a grandfather himself, whom she didn’t even know. Once she’d been surrounded and removed by police, and the hood had come off, he could not have seen or known, either, who she was.

It did not end there. A little while later, the next aisle over from me filled up with teenagers and young adults carrying hatred-of-Trump signs, yelling and screaming I couldn’t hear what, because the crowd started chanting “Trump Trump Trump!” and “USA USA USA!” A few minutes later two little girls, one about 6 years old, and her older sister about 10 or 11 years old, came down our aisle carrying hand painted paper hatred-for-Trump signs. I and the people around me were horrified, and calling out, “They’re just children! They’re just children!” But a well dressed woman in her 50’s across the aisle from me, who should have known better, reached out and ripped the signs out of their hands, crumpled them, and threw the signs down a roped-off stairwell. She was yelling at them and pointing back up the stairs, “Get out! Get out!” while the rest of us kept yelling, “They’re just children! They’re just children!” I started calling out directly to the girls myself, “We love you! We love you! Don’t let anyone tell you otherwise!” But the well dressed woman, at cross-purposes to me, kept yelling “Get out! Get out!” Finally another woman put her hands on the well dressed woman’s shoulders, reminded her again that, “They’re just children!” and got her to back off and go back to her seat. The little girls, clearly and understandably confused and terrified, finally ran back up the stairs, while people around me were mumbling loudly about the child abuse committed by whomever had sent those little girls carrying hatred-signs into a crowd.

All this while, the people those two girls had presumably come with, clogging up the next aisle over, went on an interminable amount of time with their hate-chants, making it very difficult to hear the speaker we had come to hear, candidate for president, Donald Trump. They went on so long, Mr. Trump himself commented on how long it was taking the police to “Get them out!” Finally he continued talking, although we couldn’t hear very well. Thankfully, though, the independent media switched to a directional mic, and we were able to listen again later from home, with hardly any indication of the protesters, other than Mr. Trump’s own bellowing, because he could not hear himself.

But back in the arena, the same well dressed woman who had torn the children’s signs finally asked the TCC yellow shirt security guy why they weren’t getting the loud protesters out, and all he could say was that the order had come from the highest police captain not to touch them. (Sound familiar?) I could rag on Tucson and Pima County as being the most hateful left wing edge of Arizona (which it is – just look at any election map), but indeed I want to give the police credit for what I believe was the real reason – they didn’t want to be used by child abusers into further traumatizing children by manhandling them all out.

Once that KKK hood had come off, the mask was off. These people use the same known tactics as terrorists – hiding behind children and using them as human shields. 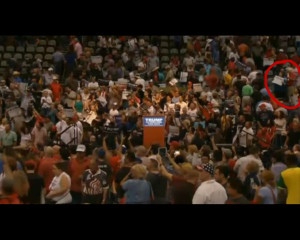 There I am, with my friend, circled in red