Evidence Facebook & Google Are Cross-Referencing Your Life With Your Friends 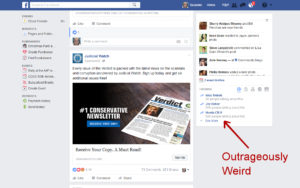 The weirdest thing just happened.   I was scrolling through my Facebook newsfeed, and in the right column under “Trending”, Facebook tried to tell me in this heated election season, that more people were discussing Honda CR-V cars than were discussing talk show host Joy Behar’s nationwide smashmouthing of Bill Clinton’s rape victims.

This really shook me up, because it obviously was an ad, despite the fact I had not looked up anything online to do with Honda in years (you know how ads follow you around for a few months once you do that?), but yesterday, I had gone with a real life friend to a Honda dealer to see the CR-V she was buying, despite my having not known until just before we got there that she was not in fact buying a Toyota from the dealer next door.

So which is it?  Was the microphone in my Android phone surreptitiously turned on by Google, its “open source” operating system’s mother ship, transcribed, and uploaded to Facebook’s ad driver?

Or did Google surreptitiously turn on the GPS in both of our phones, see that one car followed the other to the Honda dealer, after knowing she had done some CR-V searches, and then send it to Facebook to feed me ads?

All that crap about Facebook firing its Trending goon squad, to give you real Trending “topics”.  Total Bullshit.   But worse that Bullshit.  Total invasive intrusive Bullshit.