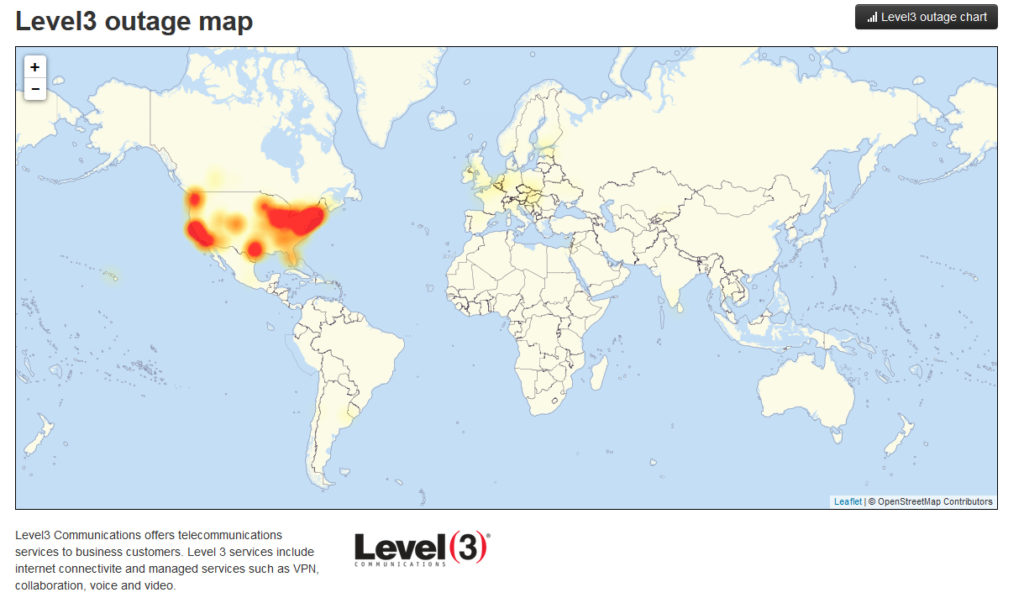 So the war has started. Please do not believe for a moment that the Internet outages afflicting major cities of the U.S. and parts of Europe today are anyone but Hillary Clinton’s doing, (with help from Obama himself). I promise you, by the evening news tonight, they will both be raising the false flag of blaming the Russians, who have absolutely nothing to do with any of this. The Russians would have nothing to gain by it. Hillary, on the other hand, who is known for her raging temper tantrums – (and is known to have personally ordered the execution of Gaddafi merely over a petty personal vendetta, – because Gaddafi had supported Obama rather than Clinton during the American 2008 primary election season) – is completely behind it. It’s her pattern.

After the brutal back to back nights of the final presidential debate Wednesday night, and the millionaires/billionaires-only NY Diocese Catholic Charities “Al Smith” dinner Thursday night, in which Hillary was completely humiliated both nights, she just can’t take it anymore and has mentally melted down. This “Al Smith” dinner is where presidential candidates traditionally “roast” (that means tell jokes about) each other, but on both nights Trump called her the criminal that she is, and even on Thursday night, right in front of her face, he reminded the Cardinals and Bishops that Wikileaks has revealed how much Hillary Clinton personally “hates Catholics”. They weren’t laughing so much after that. Their eyes were popping out of their heads. Because they knew it was completely true. Wikileaks had spilled it days before, and NY Cardinal Dolan himself had even called on her to apologize for her anti-Catholic campaign team just one day before the dinner. So this internet outage is nothing but a Hillary tantrum on a world scale, to take down Twitter, which Trump uses so much, and whatever else happens to go down with it.

All year Trump has been bypassing the Main Stream Media’s filthy lies about “what a racist or sexist he is”, by going straight to the public via Twitter, Facebook, and his own website. Early today, before the outage, Trump announced on Twitter that if elected, he will appoint a particular legal expert and Congressman, who has been very vocal about Hillary’s crimes also, as his Attorney General (see footnote) (There is an abundance of evidence, so that means she will be going to prison, if she escapes the death sentence for espionage.)

So make no mistake. If she can bomb Libya and murder Gaddafi over a minor personal snit, there is nothing she won’t do now to shut Donald Trump up, including taking down all of Twitter for millions and millions of people. It’s her pattern.

The American people are too smart for this garbage anymore.

Obama has been waging economic war against the American people for 8 years now, and he thought he was going to just hand it off to Hillary to continue the war against us, on behalf of their mutual bankster masters who are desperate to usher in the New World Tyranny Order before it gets away from them, while Obama ascends to the throne of U.N. Secretary General. And well, it’s just not going so well for either Obama or Hillary. After this low-class low-tech DDOS attack (totally beneath the Russians but not beneath Hillary & Obama), they are both going to prison. Just watch it unfold over the next year.

Trump is aware that this is a civil war. So are Americans. Thank God that so far it is without bullets. But we are done with using a “nice tone”. Our enemies certainly don’t, calling us “racists”, “sexists”, and all kinds of other names used against Americans. For decades the sneering elite have depended on being able to knife their prey with a smile, while depending on their prey’s “good nature” to not have the nerve to fight back.

And now we are very late and it’s life or death for the U.S., so we are finally fighting back. We won’t go down with the TPP & TTIP. God bless & protect Donald Trump.

3rd (final) Presidential Debate Oct 19, 2016 (~90 minutes)
(Trump reminds world of her criminality & looting of Haiti. Hillary reminds the world that she wants to take away people’s right to defend themselves from terrorists & others, in order to “protect toddlers from guns”, while she wants to simultaneously rip babies brutally from their mothers’ wombs just days before birth – by “supporting Roe v Wade”)
https://youtu.be/SHQxXsYlw4o

Hillary “Roasts” Trump at Al Smith Dinner (~19 minutes)
(in which Hillary strangely states outright that Obama is a Muslim, something both she and Obama have been denying for years – but we don’t know why they’ve been denying it)
https://youtu.be/HjPQ82vTaes

Anyway, I don’t mean to scare my overseas friends with all of this. We are doing our utmost best to avoid having a new real war foisted on us, at each step of the way.  With each escalation against the American population — first Internet outages, next economic terrorism (another financial collapse), then Electro-Magnetic-Pulses, then a shooting war, then U.N. tanks in our streets, & finally nuclear strikes on American cities — you will know how really desperate the bankster tyrants (who always profit from war) are to subdue the whole world. Obama doesn’t really care one way or the other, he just hates Americans. But Hillary really really wants WW III. They only have less than 3 weeks to escalate the war, though.

It’s really too late for them.  This internet thing is just revenge by Hillary Clinton for the likely upcoming win by Donald Trump, as well as by Barack Obama, who has extracted revenge on Americans before, by escalating TSA pat downs to full out molestations, the same week he got shellacked in the 2010 midterm elections.

Footnote – At the time this was written, Twitter was not available to confirm the article. Trump’s actual Tweet naming Trey Gowdy as Attorney General was originally posted on July 27, 2015. 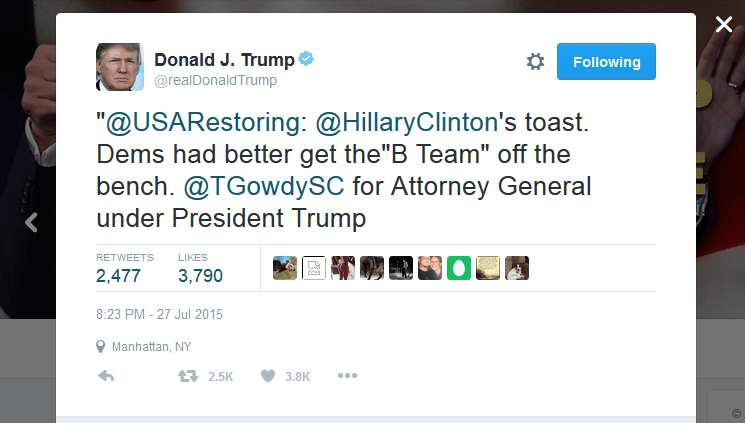