It’s fashionable to denounce Donald J. Trump for calling for a temporary ban on the immigration of “all Muslims until our leaders can figure out what the hell is going on”.  But I think this guy is crazy like a fox. We have pundits all over the place, on the right and the left, denouncing him, but then suggesting plans, worded in more PC fashion, that would actually do the exact same thing.  And he’s done something nobody’s been able to do for 15 years.  They know the jig is up, so suddenly mainstream Muslims are falling all over each other on th 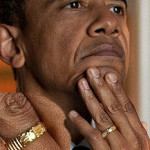 e national news, denouncing the extremist jihadis.   Non-Muslims can’t sort them out.   Obama won’t sort them out, and fires, sues, & criminally prosecutes anyone who tries.   He calls it “racial profiling”, but really I think he is kissing that Islamic promise ring on his finger.   So they need to be sorting themselves out.  Like school children. You threaten the whole class to find out who stole the lunch money. 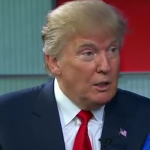 I’m sure if we were to read Trump’s book, “The Art of the Deal“, we would find a core philosophy – When the carrot doesn’t work, use the stick (or threaten to), to get the “deal” you want.  He likes to use the word “leverage“.

If you will notice Obama’s sickening nuances, he uses a term the Israelis use.  He says the terrorists do not pose an “existential” threat to the United States.  What that means is the existence of the United States itself.  It does NOT mean the existence of your sons or daughters.  He’s actually ok with a few hundred people being killed here and there.  You are supposed to feel comforted that America will still exist even when that happens.  Just live with it.  It’s the PC thing to do.

Certainly I am tired of an America that can’t sort out the terrorists from the pool they are recruited from.   As Mr. Trump says, “We can’t live like this.”