Somebody sent me these pieces of garbage:

Misophonia Test- Do you have Misophonia?

(For those who missed it, “misophonia” is the new mental illness designation for people who merely object to lack of table manners.)

This is a phony article written on a false premise. The initial breaking of an apple skin is meaningless, if people chew their apples with their mouths closed. What that woman, if she even exists, is actually running from are filthy pigs who chew perpetually with their mouths open, like cows chewing their cud, the sound of it bouncing off the walls. There is no excuse. No, you are not excused if you claim to have “allergies” and “must breath while chewing” as your pretense for this nasty aggressive behavior. If your allergies are so serious that you can’t breath, see a doctor, or put your food in a blender and suck it down with a straw, bypassing chewing all together.

This labeling of people who object to lack of table manners as “mentally ill” is apparently part of the satanic New World Order agenda for coarsening culture at all levels. Now that the NWO self-appointed “elite” are getting push back, these people who view you as cattle, good only for “animal husbandry” management, by them of course, so they can drug and vaccinate you to death for their trophy-sport, want to re-convince themselves of your lower status and their ownership of you as cattle, by promoting you actually eat and look like farm animals, while they feed you crunchy fried insects as further degradation of your humanity. 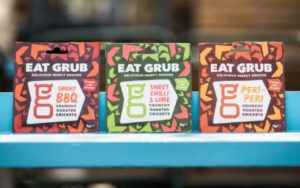 “Smoky BBQ crickets hit the supermarket: so how do the insect snacks taste?“

But of course they don’t teach their own children to eat like cows or eat insects.

So if you fall for this, you’re as Gruber-stupid as they thought.

These people who plant articles like this get an evil fetish kick out of degrading you at all levels. They tell you, “No, it’s not your fault for eating rudely. It’s their fault for expecting so much as table manners out of you. They’re mentally ill, not you.  In fact, we will now define table manners as even racist and white supremacist, since only people of European heritage expect table manners” (whether that’s true or not).

I’m NOT kidding. You watch. You watch the next article on this subject from the main stream propaganda enemy-of-the-people fake media will further escalate merely expecting table manners from a “mental illness” to “racist white supremacy”.

Chewing gum should be outlawed, sure, because it is so detrimental to dental health, but primarily because it makes people look and sound like farm animals. I have always told my kids (sarcastically, or was it) that I would rather they smoke than chew gum.

Or bring your blender.