Response to @BillBonnerDiary’s Farcical “How Trump Turns on The Fed”

Following a link through Alt-Market.com, I found this ridiculous & useless farce of an article, by someone who is supposed to know better.  Someone who peddles himself as some kind of financial expert, but who instead intentionally keeps you in the dark.  All he does is predict a useless “tweet storm” between Trump & Fed Chair Powell.  Ho hum.

But this is not some game. I highly recommend the documentary “The Money Masters” (now free on YouTube) by investigative reporter Bill Still, on exactly how the Fed “rows the economy” with artificial booms & busts, for fun, profit, and especially power (political manipulation), by privately the owned central banks.  This is in fact the basis for all false flag wars. 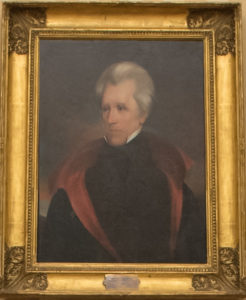 Well, it came out during the 2016 election cycle that Trump is a fan of Bill Still’s, and it’s not for nuthin’ that Obama tried to expunge Andrew Jackson from the $20 bill, while Trump hung Andrew Jackson’s portrait prominently in the Oval Office. Jackson’s defining achievement was retiring/expiring the predecessor to the Fed, because all such systems are parasitic and ultimately deadly to the societies they feed on.

Control & ownership of the American economy for plundering at will is the primary reason the global power mongers are at war against Trump, and he and the Fed-backed banksters have already been shaking threatening sticks/speeches/tweets at each other, going back at least a year.  Just what did Trump’s threat to “break up the banks” mean?

That documentary will give you new eyes to see.