@FoxNews is making a Jerry Springer out of @TuckerCarlson 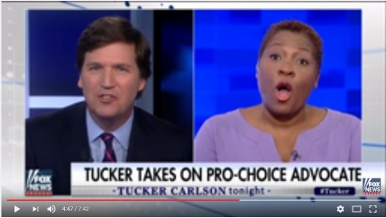 I am convinced that FoxNews wants to commit suicide by putting insane people on to fill the airways.  The pro-abortion world view is not sane or legitimate, and should stop getting continual air time.  FoxNews is not just doing this to “expose their insanity”.  FoxNews is just playing the Jerry Springer “dump the insane asylum into your livingroom for entertainment” ratings game.

I feel very bad for Tucker Carlson, who is a real thinker, as you’ll see if you search up his speeches on YouTube. But his career is going to be destroyed as they make a Jerry Springer out of him.

You deserve so much better from FoxNews, Tucker Carlson.