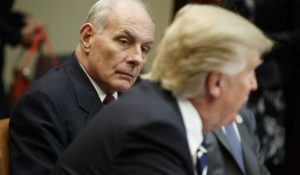 OMG, Reign him in, President Trump!  Smack General Secretary Kelly upside the head!  You’re a family man, but this jackboot guy, despite having children of his own, obviously is not!  (I’d bet money his own children hate him!)

This is just cruelty for the sake of cruelty, completely unnecessarily abusing children, just for the hell of it, when better answers are available!   Maybe parents smuggling their children into the U.S. illegally would deserve this, for committing this crime against their own children, but young children will never understand being confiscated by DHS as anything other than cruelty for the sake of cruelty.  Trauma for the sake of more trauma, of little children.  Sound familiar?   (Think #pizzagate, #pedogate.)

For sure, the childcare requirements would force DHS to involve every state’s CPS, who all get special grants from the Feds to sell children into the DC government pedophile ring, run by the Clintons, the Predator Podesta Brothers, and Barry & Michael Obama.

No, we don’t need to expand DHS into additional predator activity such as child trafficking, in addition to their their standard airport gate rapes, under their TSA.

No, we don’t need to re-victimize these children.

The correct answer is to just station new special Border Judges at every Border Patrol Station (at least until the wall is built), to adjudicate immediate deportation as soon as these people arrive, and to make deals with Mexico & Central American governments to just run a constant return train up and down their countries, to just throw these fish back, and immediately turn these victim children, and their criminal parents, right around and send back to where they came from.

That is by far the quickest, kindest, & therefore correct, way to deal with this.   Then it’s up to their home countries to prosecute them for abusing their own children.