How the Banksters think they’re gonna crash the Stock Market, the U.S. dollar, and Bitcoin all at the same time 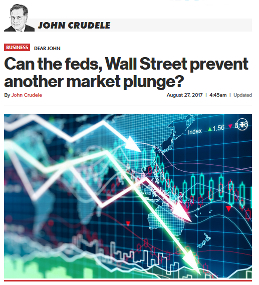 You are not asking the right question in today’s NY Post.  Of course Wall Street and the feds (you mean The Fed, who are not “the feds” at all, but a private corporation set up to serve the banks) can prevent another market plunge.   The real question is, will they?

Not if they planned the crash, they won’t!  And crashes don’t happen unless they are planned.  (How do you get to be a financial writer and not know this?)

The Fed has been telegraphing in many places on the web (here, here, here, and here) in the last few weeks that they plan to scuttle the economy, certainly in time for the U.S. midterm elections.  President Trump has taken notice, and telegraphs back he is considering breaking up the  Wall Street banks.  So I contend the crashes the banksters are planning will be no later than Jan 2018, to make sure people have time to “feel the pain”, and that the media can have several months to “blame Trump”, before people actually go to the polls.

Crashing the economy by the Fed, in regular profitable cycles, is not hard to trace. The stock market, the lending rates, the “tightness” of money.  Wall Street is planning a big big crash, much bigger than 2008, a new recession, or even a full scale long term depression (as un-politically-correct as that word is), especially if the midterms go favorably for Trump.  In fact, the more favorably the midterms go for Trump, the bigger a depression will be imposed, as revenge, on the American people for “voting incorrectly”.

You asked if they might be willing to save the stock market for themselves, since they have so much money of their own in it.  Well, the answer is No.  Because by the time they scuttle it, their money will be entirely out of the stock market, and entirely out of the U.S. dollar. Oh, you didn’t know? The banksters’ intention is to entirely scuttle the U.S. dollar, too, unless Trump does something about it.  (There are things he can do, without even breaking up the banks.)

By now the population has figured out that “printing” money out of thin air as “loans”, while not printing enough money to pay the interest on those “loans”, is one big worldwide ponsi scheme, designed to drive defaults and reposessions, of the real wealth, people’s homes and businesses.

The blockchain & Bitcoin were invented as the killshot against the IMF/Fed style system, as practiced all over the world.  It was, in fact, designed to excise the Fed & the central banks from the world economy.   So of course its inventor concealed his identity.  He knew what he had, and he valued his life.

After keeping the world on perpetually shrinking fiat currencies and in a perpetual state of war for centuries, so that the central banks can profit from collecting interest from both sides of every war, or profit from foreclosing on governments themselves for the mere powwwaaaaahhh of government ownership, the world has had enough.  We’re done.

But of course the banksters are not going down without a fight.  Wall Street and the Fed are responding with a new centralized bank-to-bank “cryptocurrency” of its own, “Ripple” (symbol-XRP), the antithesis of Bitcoin and others.   Right now XRP is still dirt cheap, but that’s about to change, or so they think.  They plan to lock up over 50% of XRP in escrow by the end of the 2017, in order to cause a run on it beforehand, in the hopes of crashing Bitcoin & the dollar simultaneously as people try to “move their money”.  The banksters will have already begun affecting prices by dumping their own assets in the U.S. dollar, the stock market, and Bitcoin, for XRP.  They have already made it incredibly hard to buy XRP directly with the U.S. dollar, without buying another cryptocurrency first.  Why?   Really, for the sole purpose of causing a pump & crash of non-XRP cryptocurrencies, especially Bitcoin, which they think people will dump for XRP, while they leverage XRP up.  (As if.)

And then they think they will blame it all on Trump.  No way are they going to “prevent another market plunge”.  Crashing the economy is their last desperate grasping gasp at existence.  Like Saddam Hussein burning all the oil wells in Iraq.