Open Response to @NFRW Commercial and Speaker at RNC Convention

I’ve been a registered Republican my entire adult life (I’m in my 50’s), and I have never heard of your organization before. I loved your commercial “There is a place for you at our table” and your inspirational speaker at the RNC on Monday …. until you flashed Gov. Nikki Haley’s face in the commercial. 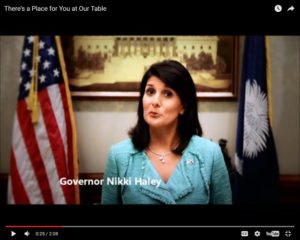 I’m sorry, but I cannot join the NFRW unless and until Nikki Haley is no longer a member. She is a snide 2 faced bigot, and I cannot associate myself with an organization with people like her in it, who helped put the country through HAYELL getting the people’s choice for nominee nominated, rather than the “Establishment’s” choice.

I understand we’re all supposed to be about unifying the party now, but I do not agree with unifying with the leftovers of the CORRUPT ESTABLISHMENT. I will check back with your organization in a few years, after President Trump has prosecuted and incarcerated the corrupt RINO (and treasonous) “leaders” who have damn near sold our country out to the Saudi fascists, the Chinese communists, and the self-appointed foreign global elites.

Once the Republican party, and the National Federation of Republican Women have cleaned house of these filthy anti-Americans, then I can reconsider joining your organization.

Yes, as an American, I WILL be holding a grudge against the greater Republican party long enough to clean out all RINOS like Nikki Haley.