Well, it’s happened.   Like everybody else, I’m curious (within limits) about UFOs, and I had seen one or two as a child, but never communicated with any.  I never thought to.  I grew up watching Star Trek (The Original Series), but as time went on I had to stop watching the subsequent Star Trek series & movies, which were progressing into making aliens more and more demonic looking.  Why?  Let’s just say I know God doesn’t do ugly, but it just looked like Hollywood was trying to “prepare” us for “something”.  I didn’t know what, but they wanted us to get used to ugly, and… well…  I just refuse.    (And now I know “ugly” is part of the agenda to make us fear real Extra Terrestrials, so that our own deep state dark ops can launch their own crimes as false flags, to blame on the ETs.)

So on YouTube, you’ll find a lot of fakos, one guy even putting up really stupid looking balloon piñatas and filming them.   But you’ll also find careful legitimate guys with real experience, chasing UFOs, like tornado chasers chasing tornadoes.  One is secureteam10.  One is Dr. Steven Greer.  However, Dr. Steven Greer is unique, in that he has two agendas – one is exposing the ET technologies our own dark ops deep state reverse-engineered in the 50’s, after the Roswell shoot down in ’47, and the second is teaching people to do what he calls “CE-5″s – “Close Encounters of the 5th Kind”, meaning “Human Initiated”.

Since around the time just after the U.S. elections, when I first discovered Dr. Greer, I have watched many hours of his talks.  Absolutely fascinating.  He does educational seminars at resorts several times a year, to teach his “CE-5” protocols and lead people on ET summoning excursions. So I found a page of his to follow on Facebook, and in February 2017 his organization announced an upcoming seminar in May.

The resort wasn’t named, likely for security reasons, but I certainly recognized the picturesque rock formation, and  the seminar registration page did mention Tucson, AZ, — especially because I have a friend whose own backyard view is exactly that rock formation.

What an opportunity!!  Piggy back on a Dr. Greer event!  😉   I contacted my friend (a fellow old-time musician) with all the details, and asked if maybe I could bring one other interested friend and we could have an evening jam session in his back yard, the last evening of Dr. Greer’s seminar, and bring our binoculars and cameras!  Yeah, pretty wacky, but my friend agreed, so we planned for Sunday evening, May 28th.

The sky.  On the way down from the Phoenix metro area to the Tucson metro area, my 2nd friend and I had noticed that although Phoenix is usually choked in chemtrails, the sky of May 28th was clear as a bell.  Not a speck of cloud or chemtrail anywhere.   We had seen a video of a UFO dissipating a chemtrail, so maybe, being aware of Greer’s event, the ETs wanted to provide a clear sky.  OTOH, we are aware from Greer’s videos that when UFOs show up at his events, quite often our own armed government helicopters come out of nowhere and start shooting at them.   Certainly, the government would want a clear shot, too, and could cease chemtrailing for a day over both Phoenix & Tucson.   But whatever the reason, both the day sky and the night sky were clear and beautiful.  The stars were beautiful.  Tucson is the home of U.S. ground based astronomy, after all, for a reason.

The main event – ET/UFO stalking.  Our mutual friend was indeed a very gracious host, even crockpotted us wonderful dinner!   He explained to us his current research toward a scientific paper to be published soon, in the field of Refractology.  It is very possible that eventually Dr. Greer’s people will be interested in this work, but until it’s published, that’s all I can tell you.   And then we played our mandolins and keyboard indoors for a while, before moving outside.

Methodologies: Dr. Greer’s CE-5 methodologies include guided meditations, with everyone in his circle joining their thoughts (and possibly even hands) in greetings and felicitations toward any listening ETs, who are assumed to be peaceful, because after all, they made it all the way here through interstellar space without weaponizing their sciences to the point of self-destruction – the very brink on which we of humanity currently teeter.   These ET people are not into arrogance and propaganda and lying and stuff like that.  Each civilization that has made it here without self-destruction are only interested in good will, and in observing us as we cross this treacherous territory in our own human history.   So the meditations are to put us into the right frame of mind, of non-fearful, non-aggressive, friendship.  I had previewed the guided meditations and preloaded my phone with them, and frankly, they kind of sounded like prayer to me, but without the “worship” element appropriate for God only.   No, these ET people are our equal brothers in the created universe.   They’re just ahead of us in understanding and controlling the science that brought them here, and they have the instruments to read projected thoughts (telepathy), and pick and choose whom they’ll answer.

Now, I had seen some other videos of UFOs responding to summoning, whether by projected thoughts, or by talking to them –

– and well, the nuns of my youth (in the effort to get us NY children to sing – believe me, NYers don’t sing), had told us that singing is like praying twice…. so the thought crossed my mind.   My friends were not particularly interested in doing the recorded guided meditations.  Certainly not when they were a half-hour long.   The music and camp-fire-style story telling, and the good food, and the evening with friends under the stars were certainly enough to have called it a wonderful, successful evening.  We watched passing planes with their red & green lights, and although satellites are common sights on a clear Tucson night, we didn’t see any.  Then at some point, one of my friends, lapsed into singing an old-time tune, “Lou Lou, Skip to my Lou! Lou Lou, Skip to my Lou…”   Some of our history included playing for contra-dances (kind like square dances, but contra-lines down the hall instead), and wanting to go with the non-aggressive, non-threatening, non-fearful attitude (and cutting my fear with humor), I started singing too – 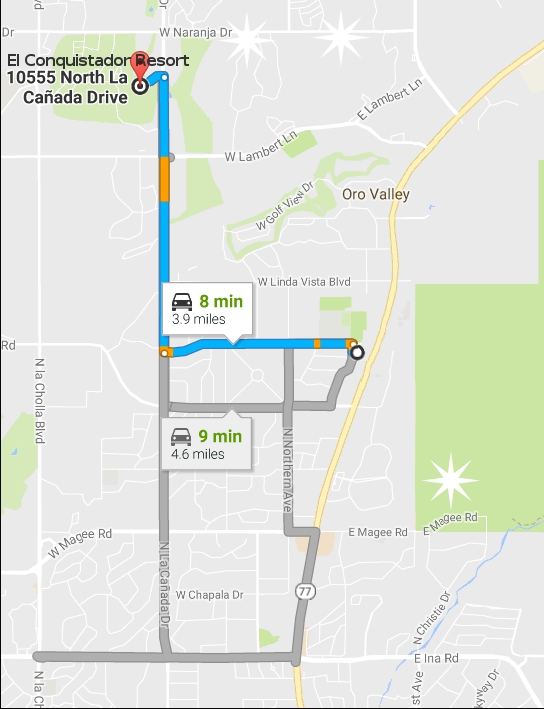 where I saw my flashes

I figured surely ETs would have figured out humor and music by now, anyway.   Of course I had my infrared video camera with me (marketed for better UFO & ghost photography), and I kept panning the skies for anything, but all I could find was Jupiter sitting over my friend’s shoulder, all night.  Hmph 😕

After a  while longer in the pleasant night air, we decided to start packing it up to make the long trip back.   Snap the mandolin case, zip up the camera case, fold the chairs.  But what?  What was that?  To the north, a flash over my own shoulder, just catching my peripheral vision.  A split second flash, with no motion component, so it wasn’t a meteor, between the stars, high  in a black part of the sky, where there were no satellites, no planes, no meteorite trails.  Did you see that?  My friends didn’t see it, and it was certainly gone too fast to grab the camera again.   I continued packing.  And then there was another!  From very high in the sky, but more centered in my field of view, in fact, feeling like a camera flash – aimed right at my retina.  Really?  Was it for me??  It sure seemed so, but I can’t ‘prove’ nuthin’.

Nobody knew what it could be, and we talked about it as we carried our belongings through the house to the front door.  I was by myself as I carried an armload out to the car.  As I opened it up, I looked up high above my car, and right away, to the south, was another flash!  Motionless, split second, instant bright, instant gone, aimed at my retina.  None of that fade-in-fade-out stuff of rolling satellites passing through sunlight.  Now that felt like a confirmation flash.  Like it would not have happened had anyone else walked outside with me.   So I still can’t ‘prove’ nuthin’, but it certainly was intriguing enough that I will try “summoning” ETs again some time.  Specifying friends only, of course.  (We have the spiritual power to make that specification.)

What I saw looked a lot like this, captured that same night 3 miles away in Dr. Greer’s group:

A friend I was with describes his own experience that night: 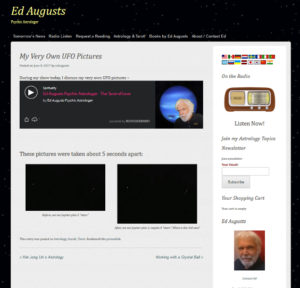