So Jeb Bush thinks disentangling himself from some of his Obamacare-dependent businesses is enough to help him win the nomination for president?  Well goody goody.  NO.  Kudos to the LA Times for exposing this stinking underbelly cronyism that makes RINOs tick in sync with Democrats — heavy financial investment in the very government policies that oppress the American people.  Jeb Bush needs to go to H-E-DOUBLE-HOCKEY-STICKS (and take Boehner with him).

But Jeb Bush’ shame is far bigger than even that!

You should see the comments on both Breitbart and the LATimes.  People are LIVID.   Except for Ronald Reagan, I’ve been holding my nose to cast my vote for Republican stinkers all my life, and I’m not going to do it anymore.  If Jeb Bush runs, I will vote 3rd party.  NO MATTER WHAT.  I AM DONE.  AND I AM NOT ALONE. 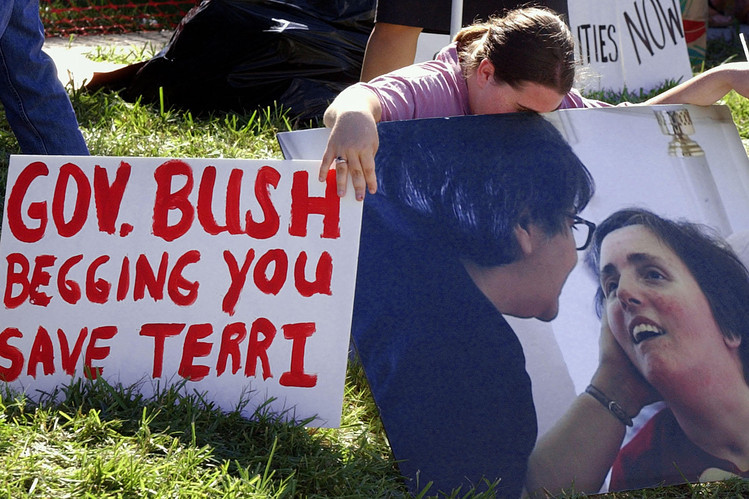 And his shame will not be our shame!! We don’t forgive or forget the horror he put her parents through, forcing them to watch her die a 2 week long starvation/dehydration concentration camp-style death, for the “crime” of being handicapped.

According to video evidence that the corrupted Judge Greer refused to allow into the court record (but you can google it up), Terri Schiavo was both conscious and did not wish to die by any method, much less by an Auschwitz-style starvation/dehydration bunker death. If Jeb Bush didn’t know all this, than he’s an IDIOT unfit for the presidency, and if he did know it, than he’s a COWARD for backing down to a pissant corrupt county judge, which also makes him unfit.

In either case, she was a physically healthy, but mentally handicapped woman, and not in any physical pain UNTIL she was starved & dried like a piece of beef jerky, and the HELL HE PUT HER PARENTS THROUGH WATCHING HER DIE THAT WAY makes Jeb Bush UNFIT AS A HUMAN BEING, much less as our president.