Hey, you wanna know the real reason Trump has ended the (forced and less than a year old) relationship between the military and trannies? The timing of the tweet announcing it was quite significant. It was because just the day before, he had officiated the launching of the new battleship, the USS Gerald R. Ford, and of course he had a tour of it. You know what he found?

NOT A SINGLE URINAL on the entire ship.

Under the passive aggressive cover of “it was cheaper and would accommodate women sailors (and tranny sailors)”, it was really just another of Obama’s passive aggressive attempts to demean and SPIT on the majority of the military every chance he got. As if the forcing of Marines to train in pink high heals wasn’t bad enough, he intended to force all the men of the Navy to sit down to urinate on the rolling seas, like Hitler (or like Obama himself). 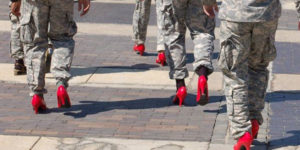 Obama demeaning our military members ANY WAY he could