We know from the testimony, at the Republican National Convention, of survivors of the Benghazi attack, and we know from the movie 13 Hours: The Secret Soldiers of Benghazi

, based on the book 13 Hours: The Inside Account of What Really Happened In Benghazi

, of the timeline of the rescue attempt during the Benghazi attack, that a “stand down order” was issued somewhere in the chain of command to the marines and other military personnel, who had been positioned and ready to come in and win the battle, and possibly save Ambassador Christopher Stevens and embassy personnel Sean Smith, Glen Doherty, and Tyrone Woods, who all ultimately died.

We also know from testimony of Senator Ron Johnson of Wisconsin, that:

“Before the terrorist attacks in Benghazi, “the State Department not only failed to honor repeated requests for additional security, but instead actually reduced security in Libya.”
~ Sen. Ron Johnson, R-Wisc.”

Sen. Johnson is the one on the Senate Committee whose question elicited Hillary Clinton’s infamously snarky nasty response, “…we have 4 dead Americans.  What difference at this point does it make?”   Well it makes a lot of difference to a lot of people, Madame Secretary.

So we know that not only did Hillary Clinton, as Secretary of State, make sure that the embassy in Libya did not have enough security when things were heating up in Libya, the security that Amb. Stevens had specifically requested many times, but when the sh*t hit the fan, a stand down order was issued somewhere in the chain of command between Sec. Clinton & the men on the ground – which means it passed through a general.

Here is General John Allen’s resume – linked, screenshotted, and pdf’ed.  I know what I think.  What do you think? 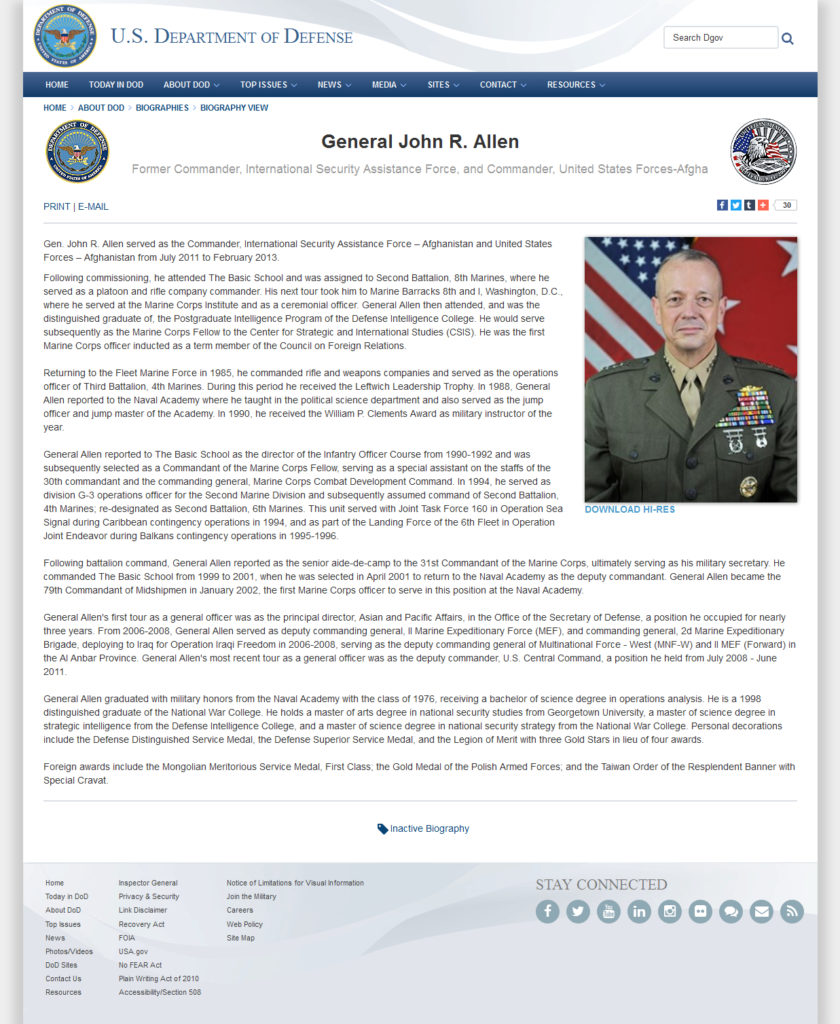 I think he had to endorse her.  Covering for each other, the way she and Obama do.